The History of The Alderlea


Alderlea, meaning meadow of Alder trees, was constructed circa 1867 for Kenneth Chisholm, businessman, political figure and son-in-law of John Elliott, a founding father of Brampton.

Designed as an Italianate villa, Alderlea is one of Ontario’s finest examples of this architectural style. The original grandeur of the estate included a large front lawn and garden, which is now Gage Park, Brampton’s first municipal park. 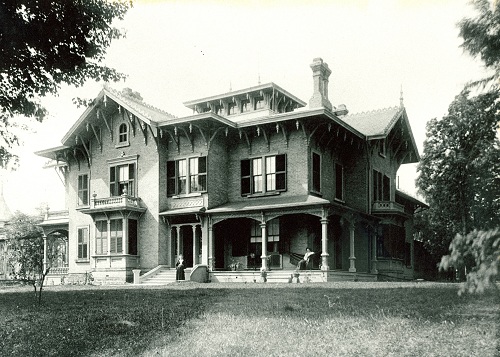 Following the economic depression of the 1890s, the grounds of The Alderlea and the adjacent Elliott estate were put up for sale. In 1944, the Royal Canadian Legion purchased The Alderlea, which they expanded in 1947 with a two-storey addition called “Memorial Hall” to accommodate soldiers returning home from service in World War II. The City of Brampton purchased The Alderlea as part of its sesquicentennial. The rejuvenation began in 2010, and involved selective demolition, heritage restoration, adaptive reuse, and a complementary addition.

As one approaches The Alderlea, they are immediately struck by the Italianate architecture including generous eaves, large turned brackets, bay windows, wrap-around verandah, tall windows, wood detailing, corbelled chimneys, red and buff brick, and the delightful belvedere that crowns the roof. Charming details, such as the word “Alderlea” etched in the original beveled glass above the entrance door, further enchant visitors.

The Queen Elizabeth II Diamond Jubilee Pavilion, which now houses the main event space, was a contemporary interpretation of the original conservatory that once graced the south façade.
The main floor showcases eleven-foot ceilings, stunning decorative plasterwork, large wood moulding and trim, marble fireplaces, and a marvellous set of pocket doors with etched glass that allude to the opulence of the mansion’s past. Many of these features were hidden under walls and ceilings for decades, like treasures waiting to be discovered.

The Alderlea stands as a monument to Brampton’s heritage, showcases the successful blend of classic and contemporary, and exemplifies the City’s commitment to cultural heritage conservation. The Alderlea awaits you!

A TIMELINE OF The ALDERLEA